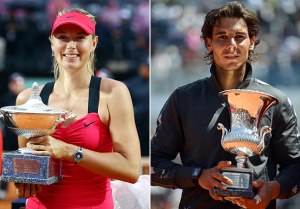 Defending champions, Sharapova & Nadal seek to continue their mastery of the red clay.

We are currently approaching the end of the first week of the second grand slam of the year “Roland Garros”, and the defending champions Sharapova & Nadal are still drop shotting it to live another day!

There were a lot of doubts around them prior to the start of  the tournament. Nadal “The King of Clay” didn’t have the best preparation on his favourite surface, having lost to Djokovic, Fognini, Murray & Wawrinka at all the warm up tournaments. In fact 2015 was his first year not winning a Master’s Clay tournament. Regardless of the results thus far, one can never rule Rafael out of the French Open, having won it 9 times out of the last 10 years. He had a relatively easy first round win against the french wild card Quentin Halys, with his serve only being broken once. His next opponent is his fellow Davis Cup compatriot Nicolas Almagro, whom he has beaten twice already this year, both in straight sets. Nadal leads the over all head to head 12 – 1, with Almagro’s sole win coming in Barcelona on clay in 2014.

Nadal is projected to meet Novak Djokovic in the Quarter Finals.  With Novak currently the bookies favourite having had a formidable start to the year winning the first grand slam of the year in Melbourne the “Australian Open” for a record breaking 5th time, the most in the Open Era as well as 4 Master titles thus far, one can see why this match is being labeled the match of the tournament and possibly the decider of the 2015 Champion.

Similarly to Nadal, Maria Sharapova who once described herself as a cow on ice whilst playing on clay , who later went on to reinvent her game on the red surface by reaching the final at the French Open 3 consecutive times and lifting the trophy twice has had a tough time in recent months on the dirt.

Sharapova who was aiming to lift the trophy at the indoor clay arena in Stuttgart for a fourth consecutive time was upset in the second round by the German Angelique Kerber. Sharapova’s disappointing form continued in Madrid where she was the defending champion, as she was defeated rather comfortably by her fellow Fed Cup teammate  Svetlana Kuznetsova, the 2009 French Open Champion.

Maria subsequently traveled to Rome to participate in the Italian Open, having wanted to reignite her form on the surface. Sharapova regrouped and went on to lift the trophy for a 3rd time. With this result Sharapova guaranteed herself the second seed for the French Open, meaning she could not face her nemesis Serena until the final.

Sharapova who is currently battling a cold in the french capital of Paris has won her first two rounds with no hiccups. Sharapova’s third round match is scheduled for Friday the 29th May where she will face off against Sam Stosur for the 17th time. Maria leads the head to head with 14 wins, with the two losses coming on hard courts. Stosur is currently on a 7 match winning streak having won the international tournament in Strasbourg. Although Stosur’s sole grand slam win came at Flushing Meadows, one could argue that Clay is Stosur’s best surface having reached the Semi Finals at Roland Garros three times, with her best result been Runner Up to Schiavone in 2010. Thus this will be deemed to be Sharapova’s first real test of the tournament. If Sharapova manages to win this match, it is inevitable that Sharapova will play the final for the fourth time.

Both Nadal & Sharapova prove to be a force to be reckoned with on the dirt, and one can never disregard these champions regardless of what form they may have exhibited prior to Roland Garros.

The Tennis Tribune strives to deliver the latest stories across both the ATP and WTA Tours.

Donations are welcomed to help keep the site alive.